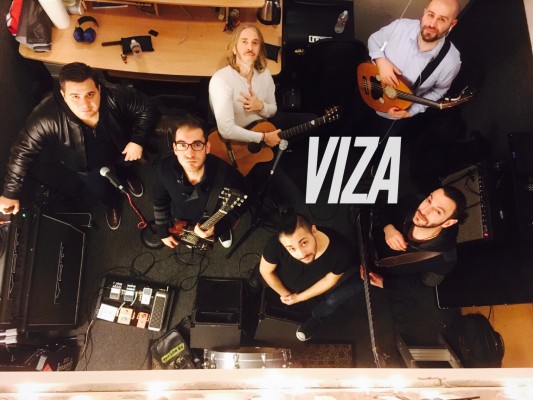 “Viza is one of the most unique and interesting bands I have ever encountered. Their live shows are energetic and fun” (Serj Tankian)

Viza has completed recording its new album “Aria” – the long anticipated follow up record to the band’s recent works “Carnivalia” and “Made in Chernobyl“. Recorded by Sam Martin at Swinghouse Studios in Hollywood, CA, “Aria” embodies a groundbreaking effort for the band – a provocative narrative which reflects the unique, and always evolving sounds of Viza.

The songs of ‘Aria‘ represent the project’s singular creative voice – a fitting tribute to the band’s artistic journey and recent experiences touring all over the world. “Aria” also featured the seasoned skills and contributions of several industry stalwarts. Aerosmith Mixing Engineer Warren Huart put the finishing mixing touches on the record at Spitfire Studio in Laurel Canyon, CA with assistance from Adele Engineer Phil Allen. Mastering was done by Bob Ludwig protégé Adam Ayan at Gateway Mastering Studios in Portland, MA. The album will be released in Europe in February 2014, as part of the band’s upcoming tour in support of “Aria“.

“This album is a significant statement – both from an artistic perspective – but also in more basic human terms as a family of musicians creating together and inspiring each other. We really enjoyed working with such a talented and reputable team in Warren, Phil, Adam and Sam – and feel this is our most ambitious work yet. We are super excited to hit the road and play some Aria songs for our fans!” stated oud player Andrew.

“Expect a more mature sound with plenty of the same ole fictional narration that has made our songs enjoyable, heck there’s even going to be another VIKTOR story.” says K’noup.

Here’s what the team had to say about recording “Aria”:

“There’s something unbelievably refreshing about Viza, the band and their music. The honesty pours out of them, the drums are played with pure unadulterated feel – not edited to a grid; the incredible guitars and bass and the truly unique sound of wonderful Oud playing make this band a one of kind mixture of melody, passion, beauty and aggression. Add K’noup’s stellar vocals and you get a breath of fresh air in this over-produced generic land of modern Rock. I fought hard to get the opportunity to mix this Album ever since I heard the tracks as they were going down – I knew this would be an amazing project to be a part of. Bravo guys you made an incredible album!”

“Working with Viza was badass. A band with that much talent makes my job easy. I haven’t been this excited about a band in a long time.”

“Viza is a fantastic band, incorporating heavy rock with awesome chops and musicality – right in my wheelhouse! Their new album “Aria” was expertly executed all around, a fun listen from beginning to end, and an absolute pleasure to work on!”

“Working with Viza was a fantastic experience. The band brings a remarkable energy to the recording process that is so very evident in these tracks! Don’t miss this album!!”

The band’s upcoming tour in early 2014 features a show in NYC at Webster Hall on January 17, followed by 11 dates in the UK supporting Skindred and Soil. The group will then finish the next leg of its tour with 15 shows all over Europe in support of the new release, supported by the talented New York City based neo-primal artists PUi.

Viza continues to captivate the global music scene with an erratically amusing blend of energized international rock. Unique in its musical arsenal is the inclusion of oud and percussion blended with more traditional rock elements such as guitar, bass and drums. This fascinating fusion, combined with dramatic and powerful live performances have garnered Viza significant success all over the world.

The band’s travels have taken them across the globe on a consistent basis over the past 3 years. In March 2013 Viza headlined all over Europe for a highly successful tour in 20 cities. In September 2012, Viza embarked on its second tour with System of a Down frontman Serj Tankian for his “Harakiri” World Tour, a nearly 6 week endeavor that featured 19 performances all around the world. In 2010, Viza also supported Tankian’s “Imperfect Harmonies” Tour in Europe in the cities of Hamburg, Cologne, Paris, Zurich, Bologna, Athens and Yerevan, and continued to tour in select cities throughout 2011.

“Loving the new record; Carnivalia’s awesome. I love hearing the new influences and the fun loving spirit and musical wizardry. Overall a really great effort”, said Tankian. “Viza is one of the most unique and interesting bands I have ever encountered. Their live shows are energetic and fun”, he added. Tankian has worked extensively with the group, serving as Executive Producer of Viza’s previous album entitled “Made In Chernobyl”, and also sang as a guest vocalist on the album’s “Viktor” track.

Recorded by Jared Gosselin (D12, Macy Gray) at Frank Zappa’s UMRK Studios, Viza’s fifth album, “Carnivalia” is the band’s most animated work – a journey through a symbolic theme park derived from satirical and dramatic influences. Inspired from Gogol Bordello’s multicultural rhapsodies and System of a Down’s notorious screams and riffs, Carnivalia embodies Viza’s groundbreaking songwriting and experimentation which has amazed audiences with a mesmerizing blend of instruments, various styles and continued evolution of Viza’s sound.
Formerly known as Visa, the band released two EPs and two full length albums, along with an award winning music video. The band’s De Facto, Eros and Made In Chernobyl albums incorporated music pervaded with sonorities from various influences and musical styles and blended elements of aggressive rock, dance and satirical social commentary.

“You have to see these guys live as soon as is humanly possible.” (Rhythm)

Among the band’s extensive touring schedule, Viza has performed at one of Europe’s largest and most prestigious music events at Hungary’s Sziget Festival’s mainstage (alongside Korn, The Killers, Axwell, The Vaccines, The XX among several others) as part of a month long European tour in August 2012. Viza has also performed at Sweden’s Malmofestivalen, Norway’s Kartfestivalen, Slovenia’s Schengenfest and Trnfest and Greece’s Rockwave Festival (alongside The Prodigy, Gogol Bordello, Flogging Molly, Marky Ramone’s Blitzkreig), and has toured Europe 6 times in the past 2 years alone.

Demonstrating a knack for reinventing old rock classics, Viza recently covered the Doors tune “Alabama Song (Whisky Bar)” by adding its own strong seasonings and aggressive fusion style in a compelling reimagination of this classic rock ballad. The song is available for free download at www.experienceviza.com.

“With their seven strong villainous circus gang look and multi-instrument pile up… …Viza have tunes too, notably their fiendishly danceable [music]. If they bring a party like this again, their return [to London] can’t come soon enough.” (Kerrang!)

Aside from a passion for music, touring and song writing, Viza’s extensive performances around the globe also serve as their voice for promoting social consciousness of human rights and community issues – as well as providing opportunities to fundraise for various charities, homeless shelters and orphanages.

“When Quentin Tarantino shoots his next movie, he should be using this as the soundtrack.” (This Is Not a Scene)

Viza is sponsored by :